Remember when the prediction was Oscar season would bring smarter movies? Perhaps Hollywood has outdone itself this time.

“Cloud Atlas” is the most recent ground-breaking film from an industry that hasn’t done a lot of ground-breaking lately. Perhaps it is the deep though required to understand the meaning of the film, or perhaps in the deep concentration required to even follow it that makes it as ambitious as it is. 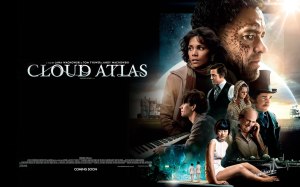 Upon first viewing, “Cloud Atlas” is a spectacle of fast moving stories that somehow connect to each other. Within the nearly three hour movie, audiences are introduced to six different stories, all containing the same souls, who will be reincarnated and played by the same actors in the subsequent stories.

Based on the 2004 book by David Mitchell, which critics and author alike deemed “un-filmable,” each story unfolds down a timeline in which reincarnated souls feel the reverberations of decisions they, or others, made in their past lives, and is in turn told as a story itself in the next story along the line.

The film opens in the South Pacific, progresses next to Belgium in the 1940s, San Francisco in the 1970s, the United Kingdom in 2012, a dystopian Neo Seoul around 2144, and a post-apocalyptic Hawaii in 2314. In a nesting egg design, each story tells itself within another story until the conclusion, which drove this reviewer bonkers until the Cliff Notes of the book was obtained and explained what happened.

The ideas of reincarnation and that all things in the universe are connected are explored in the movie. The souls of the various characters evolve with each story, whether the evolution is good, bad, or neutral in terms of changing the character. One example would be Tom Hank’s characters who progress from vile to crazy to saving the world and what is left of mankind after the Fall.

The entire film is a beautiful piece of cinematography. Neo-Seoul would recall audience members to “Tron: Legacy.” Expressions and landscape are caught on film and utilized to increase the film in its ambition, and it is so excellently done, this movie demands a second visit to be caught up in the beauty of it again.

The two most enjoyable actors in the film were Hugh Grant and Hugo Weaving, although Jim Broadbent’s desperate publisher added some levity to an otherwise serious movie.

Last seen in “Captain America” as Red Skull, Hugo Weaving sticks to his villainous guns, playing a hit man, a green, top hat and waist coat wearing devil to the natives of Hawaii called Old Georgie, and a sadistic woman named Nurse Noakes bent on keeping the residents of the nursing home imprisoned.

Hugh Grant steps out of the romantic comedy genre to play a slicked hair energy businessman hiding a dark secret to a cannibalistic Kona chief in the post-apocalyptic Hawaii.

The makeup in the movie is amazing. The transformation of the actors between races, ages and genders keeps the idea of reincarnations in place by allowing the actors to play the same soul in the different stories. Halle Berry was made to appear as a male, and Hugo Weaving as a woman, and it was convincingly done, as well as the transformation of part of the cast to appear Asian, so as to play characters in the Neo-Seoul story.

The film is a beautiful, ambitious piece, although confusing. The $100 million film lives up to its price tag in cinematography, makeup, and the storyline that keeps audience members caught up in the fascinating plot.