Dallas hosted their 11th Comic-Con at the Irving Convention Center May 17-19. This is no small event, having had Patrick Stewart and Stan Lee last year, which was rather shocking  when I discovered this event in March 2013. Upon discovery, this became the plan for a post-graduation trip, since a jaunt to San Diego Comic Con was extremely unlikely. Three day passes to the event ran $50, not bad considering the line-up for the event that featured William Shatner, Brandon Routh, Ioan Gruffudd, Richard Dean Anderson and more.

Doors didn’t open until 2 p.m., so we left Midwest City at 9 a.m. After a pit-stop in Ardmore, Okla., to fill up on not-quite-yet four dollar gas, we hit Dallas, and the craziness, right before 12:30 p.m.

Despite this being the 11thyear for the event, organization is not strong. Attendees were lined up in the parking garage adjacent to the Irving Convention Center, apparently a change from previous years where patrons stood outside in 90 degree weather. When the doors opened,  it took my group about an hour to get our wristbands, which were to last us three days, and enter the convention center.

Not many panels were scheduled for Friday. This was a great opportunity to meet some of the actors, however. Fans of the SyFy Channel may recognize the name Colin Ferguson, who starred in “Eureka,” one of the actors I was able to meet. I was able to spend a few minutes speaking to him, and he was courteous and engaged in the conversation, instead of hurried, as some of these events are notorious for rushing people through the lines. 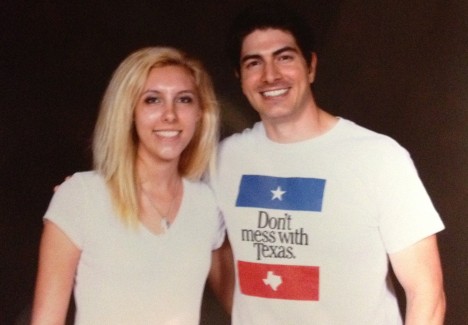 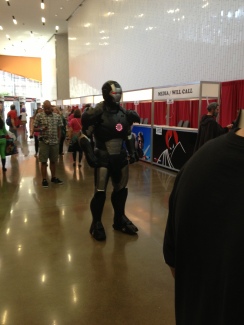 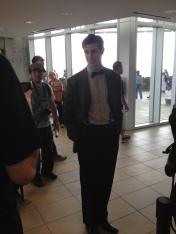 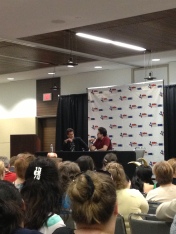 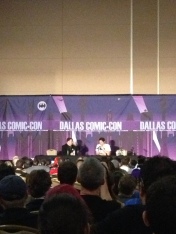 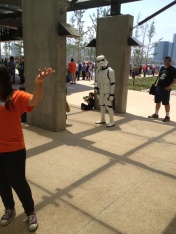 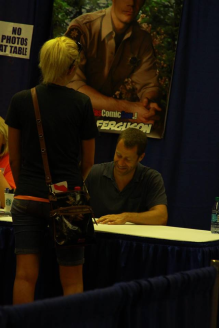 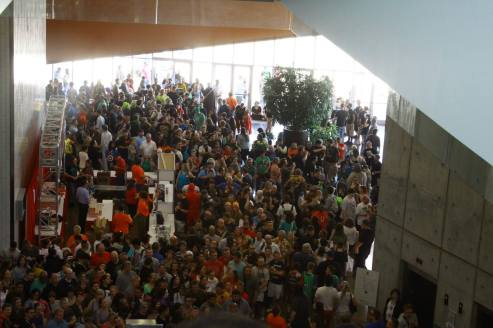 Saturday was the big day at the Con. Larger panels were planned for today, like those for the “Star Trek: Next Generation” cast members Levar Burton, Brent Spiner and Gates McFadden , Adam Baldwin(“Firefly”), Richard Dean Anderson(“Stargate SG-1) and Shatner(Star Trek).  This guaranteed the convention would be full, and where organization seemed to have fall apart.

There were hundreds lined up outside the center to get in, and miscommunication with the line of people who already had wristbands let to a delay and relocation into the parking garage.

Granted, the garage was out of the 90 degree sun, but without fans and a large mass of people, it soon got rather unbearable.

Doors opened at 11 a.m. and we finally entered at 12:30 p.m. Here the design of the convention center,  vertical rather than horizontal layout, became rather inconvenient. A massive bottleneck formed in the exhibit hall, escalators shut down from the mass of people on them, and soon a bottleneck formed at the top of the escalator, creating a dangerous situation as people on moving stairs smacked into those stuck in front of them.

The real fun began for us at the 1 p.m. Brandon Routh(Superman) panel, which we barely made, but enjoyed what we stayed for. We left early to get in the photo line, so I could get my picture with Routh. Let’s just say there was a lot of restraint to not “fangirl out.”

After this we had four hours to explore before I had to line up to get my picture with Ioan Gruffudd(Mr. Fantastic).

During this time we talked to cosplayers from all around, to those dressed as a gender-bend Avengers, to quite a few Doctors, and witnessed an eight-foot-tall dreadlocked Wookie walking through.

The craziest part of the afternoon was maneuvering the third floor during the Shatner photo op. I’m pretty sure half of the 4,000 people there took a picture with him, and that line was insane. We ventured to the fourth floor instead and I had to opportunity to talk to Routh and he signed the picture I got with him. He seemed like another celebrity who enjoys the fan-oriented events he attends.

Finally 5 p.m. rolled around and it was time to line up for photo ops with Mr. Fantastic. I was slightly more contained at this point, so there was a lesser chance of me freaking out upon meeting this actor. He was extremely polite, with his Welsh accent. Unfortunately I was unable to get his autograph, when the printers got backlogged from all the Shatner pictures.

On a slightly creepy note, one definitely notices when the person next to you smells nice, rather like Mr. Gruffudd did, when you know you reek of nerve/hot sweat from gallivating around the convention center in mid-calf boots, jeans and a leather jacket to cosplay as a Winchester. End creepy note.

What would have been day three of our Comic-Con adventure was cut short. At this point the threat for severe weather in Oklahoma was prominent, and we departed Dallas to beat the storms home. We made it back about an hour before the first of the tornadic storms fired up.

The Dallas Comic-Con is definitely something I would recommend to comic book and science fiction fans in Oklahoma. It’s reasonably priced and not too far away, and despite the lack of organization, it was a fun-filled event that may be repeated next year.