The latest in the apocalypse themed movies, “This Is the End” stars Seth Rogen, James Franco, Danny McBride, Jay Baruchel, Jonah Hill and Craig Robinson as themselves facing the apocalypse and all the craziness that happens with it. 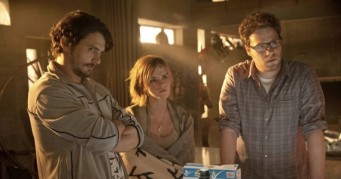 The events begin unfolding during a star-studded party at James Franco’s house, when a pit opens up and stars start to fall. In order to survive, the big six lay out a plan to live out the apocalypse.

The movie features numerous cameos by familiar faces, all enduring crazy scenarios. Where Rihanna, Michael Cera and Emma Watson’s cameos were featured heavily in the trailers, appearances by Paul Rudd, Channing Tatum and a surprise performance by the Backstreet Boys were kept under wraps for audiences.

The film is based off a 2007 short film by Seth Rogen and Jay Baruchel called “Jay and Seth vs. the Apocalypse.” By combing elements from horror movies, the movie plays the apocalypse as a straight event, and it allows the actors to play off the event to comedic heights.

Audience members will laugh out loud the duration of the film, as stars meet gory demise by falling into pits, impalement, possession or being eaten by members of Danny McBride’s cannibalistic cult in rather over the top ways.

Jay Baruchel is the straight man in the group, realizing it is in fact the apocalypse occurring, and how to ultimately reach the afterlife.

The movie may offend some of a stronger religious viewpoint, as the insinuation of the Rapture is threaded throughout the movie.

“This Is the End” is flat out one of the funniest movies to hit theatres for crowds that enjoy the gross humor of these actors since “21 Jump Street” in early 2012. Opening against “Man of Steel,” this movie won’t win the box office, but with star power and guaranteed laughs, second place will be an easy success.

“This Is the End” has a runtime of 147 minutes and is rated R for crude and sexual content throughout, brief graphic nudity, pervasive language, drug use and some violence.