It took three years for the sequel to “Percy Jackson: The Lightning Thief” to finally arrive in theatres. Based on the bestselling Rick Riordan books, the series follows Percy Jackson as he discovers he is the son of the god Poseidon, a demi-god, and all the perils that come with the title. 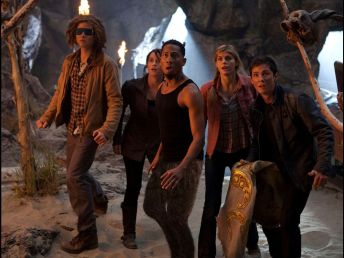 “Percy Jackson: The Sea of Monsters” is set after Percy (Logan Lerman), Annabeth (Alexandria Daddario) and Grover (Brandon T. Jackson) successfully saved Olympus from Luke (Jake Abel), the son of Hermes. When Thalia’s Tree, from which the barrier protecting Camp Half-Blood is sickened, the three set off again, accompanied by Tyson (Douglas Smith), Percy’s cyclops half-brother, to retrieve the Golden Fleece from Polyphemus and save the camp, and defeat someone so powerful, it took the three brothers, Zeus, Poseidon and Hades, to destroy the first time around.

What sets this movie apart from other YA book to film adaptations is its emphasis on Greek mythology and how it ties into the characters. We didn’t see much interaction between the main characters and their godly brethren, save Medusa and Hades, and it isn’t much changed in the sequel. Dionysus (Stanley Tucci), the god of wine, is forced to help run Camp Half- Blood sober (his wine turns into water) alongside the centaur Chiron (Anthony Head), and we see the gang meet Hermes, Luke’s father, played by Nathan Fillion, who makes a witty pop in reference to the cancelled cult favorite “Firefly.”

Where the movie lacks in gods, it does feature two beings more well known for the interaction with Odysseus: Charybdis and Polyphemus. Although the interaction with the giant was great, it’s hardly believable that the crew ran around Circe’s island without so much as an interaction with her. A deviation from the book that I heard pointed out multiple times from various audience members.

What sets this movie apart from its predecessor is the graphics. The rainbow colored Hippocampi to the shimmery interiors of Charybdis stomach are small examples of the detail provided to the magical world created by Riordan.

When the Golden Fleece does more than heal the tree, it is clear that, despite the low revenue made from the first movie, and the smaller box office return so far for the sequel, Fox has clear plans to continue the saga through Percy’s continued interactions with Luke and eventually Kronos.

Between the effects and overall fun this movie provides, the film garners an A from me, someone who hasn’t read the books. With character actors like Nathan Fillion, Stanley Tucci and Anthony Head helping support this saga, I can see it continuing in the environment of Hollywood mining books for content. It’s a great back to school movie for parents looking for something to enjoy across the family, and is only the first of big name YA books to hit theatres during the fall school months.