This movie has the honor of being the middle child of the “Hobbit” trilogy. What this typically means is, if you haven’t seen the first one, there isn’t time to explain it to you, and most likely the end doesn’t resolve much except moving our main characters along geographically and emotionally. Which is exactly what happened here. 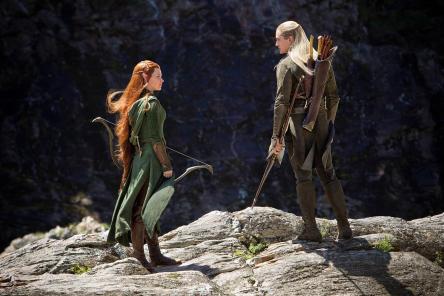 “Desolation of Smaug” introduces us to Laketown, a ramshackle fishing town run by the Master of Laketown (a rather grimy Stephen Fry) and his slimy assistant Alfrid (Ryan Gage). From here, our merry band of dwarves, plus hobbit and wizard, are still being tracked by the white Orc. This story progresses quickly as Azog is called away, the group faces a horde of giant spiders, and we finally get to meet the elves of Mirkwood.

The elves have been an anticipated part of the sequel. The return of Legolas (Orlando Bloom) is marked by his less-than-friendly behavior towards the dwarves, a quick mention of Gimli, and the introduction of Tauriel (Evangeline Lilly), a character masked in mystery. Tauriel is a captain in Elvenking Thranduil’s (Lee Pace), army, who may or may not have a romantic subplot going on with Legolas, as well as a special connection to dwarf Kili (Aiden Turner).

Lee Pace portrayal of Thranduil is reminiscent of Charlize Theron as the Evil Queen in “Snow White and the Huntsman.” The crazy may not be obvious, but Pace’s dramatizing of the ancient king makes him seem less calm elf a la Elrond and more basket case like the Queen. But that may have just been the intensity of the performance. Nonetheless, Pace plays Thranduil brilliantly, and whose performance promises more in the next film.

I saw this film in 3D, and save for the miniscule gratuitous flying off the screen effects, it doesn’t offer much. The best part, which 3D has been doing pretty well with lately, is the depth of the picture. It lends that “looking through a window” effect which makes everything seem more intense and brighter.

Finally, let’s talk about that dragon. Smaug, Very little has been seen of this dragon, save for a shot of the eve, some voice clips and maybe a brief glimpse of the head as a whole. Dragons have been seen in films previous to this that either set the bar or lowered it. Jackson and crew, instead of going for a new look for a dragon, went directly to the size. Smaug is massive, and with the motion capture from Benedict Cumberbatch, whose distinctly reverberating voice tone is lent a sibilant undertone for the dragon. After toying with Bilbo, and some of the company, Smaug sets off to teach them a lesson.

Seriously. SPOILER ALERT: The dragon doesn’t die now. Which I was rather surprised about. By adding in the new Sauron related plotline, which had Gandalf leaving our company for the fortress of the enemy, the entire film is jam-packed. The next film will, by necessity, be over three hours just to resolve the dragon plotline and introduce the Battle of Five Armies, leaving little room for the main hobbit, Mr. Bilbo Baggins.

“The Hobbit: The Desolation of Smaug” is rated PG-13 for intense fantasy action violence and some frightening images. It’s the middle film that does a good job of progressing the story a bit, introducing new and old characters, and giving us something to whet our appetite until the conclusion in 2014. For that, I’m giving it an A for effort.

2 thoughts on “The Hobbit: Desolation of Smaug”